And it's time again for the recipe for the month of June. And surprise I("Notitie van Lien") am the Kitchen of the month this time.
I choose a recipe for June with health benefits….lots and lots of bran. It is a recipe by the Simili sisters (sorelle Simili), the famous cooking and baking twins from Italy.

I’ve baked this recipe once in 2008, but I didn’t add any remarks or notes to the recipe, so I don’t have a clue if I did follow the recipe or made adjustments and how much bran and extra water I used.It can be hard to make a 100% whole wheat loaf that is not like a brick and moist. This recipe is all whole wheat with bran added.
The recipe suggest 50-100 g of extra bran…. And that is a lot, because bran is very light in weight. In the book they say that a student urged strongly to just use the minor quantity (50 g), because it would become like chipboard if you were to use more. So it might be daring to use more than the minimum amount, let us see what everybody chooses.

It will also depend on your whole wheat flour, I know that fine milled WW makes a denser loaf than when the bran is left larger and added back later to the rest of the flour.
Also you have to add extra water (and time to let it absorb it) with the bran. You really have to use your baker’s experience and gut instinct to get the right consistency.

There is an addition of walnuts, or raisins, or a combination. It might be a good idea to soak both on forhand, so they don’t substract any moisture from the dough.There is an option to use milk powder, of which they say that it is more aromatic and has a fuller taste, but you can also use milk instead of water and leave the milk powder out. (you can use another kind of milk if you want: almond, oat milk ecc.)Well I guess the challenge is to bake a bread with as much bran as possible without eating chipboard or cardboard.

And it turned out better than I expected. I used 75 g wheat bran (a loaf) on top of the whole wheat flour, the bran was pretty fine.

I did a little test with two methods of kneading:

The first one. I kneaded the dough without the added bran, so that the gluten were already strong, in the meantime soak the bran in some water. I used less water than the recipe; about 60 g water on 75 g bran, but it will depend on the bran. Add the soaked bran after kneading the rest for at least 8 minutes and knead it in (my machine was on 1) until combined, this takes several minutes.

The second one. I added everything (except raisins and nuts) to the bowl at the same time and kneaded until I could pull a window from the dough. This used 40 g less water. Even though both doughs ended up moist.

There was just a little difference, in the first one the air was more evenly distributed and seemed a little lighter. But nothing shocking.
I used 100 g soaked raisins and 100 g coarsly chopped pecans for each loaf.

I think it's best kneaded long and slow, but too long is possible as well, as the gluten are already 'bothered' by all that bran, keep the gluten strands as strong as possible, so check the window pane from time to time.

I baked for 40 minutes, I think it really needs that, because the dough is moist and heavy and otherwise the sides of the loaf may collaps. Do cover with foil if the top gets too dark. Leave it to cool completely before slicing.

This morning we had it for breakfast. Our boy prefers his bread as light as possible (read: white), so he skipped this one and ate yesterdays' bread (whole wheat!). But my husband LOVES this bread, in his view it's the more fibre (seeds, kernels ecc) the better (I knew that). So that was a hit!

I prefer my bread divers (sometimes white, sometimes ww, sometimes in between) but always without brick-qualities and moist. And this was delicious! It really was, I wasn't expecting that myself to be honest. I put some Gouda cheese on it and it was just great. I personally loved the raisins in it... yes I have a sweettooth.

So for me it was a succesfull recipe. Now there is the challlenge to make this with the largest amount bran given a 100 grams!

And it can be done! I've baked the bran bread again, but now with 100 g additional wheat bran! I had a different kind of bran now, these were a lot coarser. It seemed like an awful lot of bran when I weight it. I pre-soaked them with 300 g of water (which turned out to be a bit too wet, so I had to add a little more WWflour in the end). I baked one large loaf in my pullman pan with the lid off. I used the first method of the dough making, just because it makes sense to me adding this much gluten disturbing stuff. And it worked
It would be great if you could join this challenge, how much bran can you add to still make good edible bread?  Get your bag of bran, knead, post and let us know how it went. And join us as a Bread Baking Buddy, send you results and what you thought of this to the Kitchen of the Month (that's me this time!) type BBB Brab Bread as subject to notitievanlien(at)gmail(dot) com and you'll be send a Bread Baking Buddy Badge that you can add to your blogpost if you like. Deadline the 29th of June. Take on the challenge and let's bake!
Bran Bread
(makes 2 loaves) 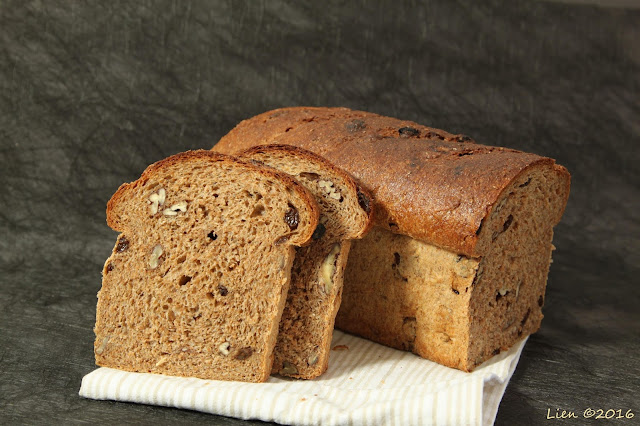 500 g whole wheat flour
300-380 g water
50-100 g (organic) wheat bran (1 used 75 g/1 cup)
+ Extra water for the bran (± 2 g water per 1 g bran)
20 g fresh yeast or 7 g instant dry yeast
1 TBsp malt flour (light or dark) (or honey)
30 g butter
1,5 tsp fine salt
50 g milk powder (you can also skip this and substitute the water with milk)
200 g walnuts (or other nuts), coarsely chopped (you can also use raisins instead or ½-½)
Mix the yeast with 3/4 of the water, malt flour or syrup (or honey), butter, milk powder and the bran (and additional water), add some of the WW flour, salt and start mixing it adding the rest of the WW flour and if needed the rest of the water. Don't put everything in at once, you can always put more in later when the dough is almost ready. The dough has to be moist and stickyAs the bran in the flour and the added bran take time to absorb the water, leave the mixture to rest for about 10 minutes. Now check the  consistence and decide if there is more water needed. Start kneading the dough, the dough should not be very sticky after a minute or 6. Put the dough in a lightly greased bowl, cover and leave to rise for about 1 hour.While the dough is rising: Soak the raisins for about 20 minutes in lukewarm water, pat dry with a kitchen towel and leave them on a dry tea towel to dry a little further. If you use nuts you can do the same, the soaking time will be longer about 40 minutes.
Turn the dough out on a lightly floured surface and press or roll it out flat in a big oval. Divide ⅔ of the nuts and/or raisins over the dough, fold the dough in two, press or roll out again and sprinkle on the remaining nuts/raisins. Roll the dough (jelly roll style) and divide in two. Or make one large loaf.Take one half and place it on the counter and press the escaped nuts/raisins back in the dough, press it down a little and shape it to a round, without working the dough, but by rolling it between your cupped hands on the surface. Repeat with the second half of the dough and place the dough balls on parchment paper. You can also shape the dough into a log and place it in a greased baking tin.

Now cover with lightly greased plastic plastic. Let it rise for about 45 minutes in a warm and draft free spot. Check if it's ready to bake by pressing a floured finger in the dough, it the dent springs back, leave it to rise longer, if the dent doesn't disappear, it's ready to bake.

Make slashes in the dough and put them in the oven (on the stone if you have it), pour some water in the metal tin to create steam and quickly close the oven door. Bake for about 30-40 minutes. Check the temperature of the bread (95ºC/200ºF) to be sure it is cooked.If the top gets too dark before the bread is done, cover with tin foil. Take the loaves out and leave to cool completely on a wire rack.
(Adapted from: “Pane e roba dolce” - Sorelle Simili)
Geplaatst door Lien at/om 09:56

Looks absolutely great Lien, I love the challenge within but I need to take a rain check and bake tomorrow. I will bake though!

I bow down to you, Lien. How I wish that the bread I made looked as wonderful and lofty as yours.

But. While I wasn't that happy with the results, you have achieved a major success. My husband (who is like your son and prefers fluffy white bread) has decreed that this bread is delicious!

Thank you for getting us to do this challenge.

Your loaves are just so tall and beautiful! I really like the structure that baking in a loaf pan gave them. We loved this bread and so did our friends!

You are totally incredible baking it every which way and with fabulous results.
We did enjoy this. Nothing like chip board at all. Not light like paste board white but far from a brick.
I'm baking it again tomorrow. It's that good ... more nuts and more raisins.

Congrats on this one, Lien.... I think most were, um, curious before baking and happy after. Lovely bread

Another winner Lien, even if I did overproof mine. Your loaf is the best of all, with great crumb and crust and well distributed nuts and fruit. Thanks for picking this one!

What a beautiful bread! I always love your loaves but this one in particular I plan on making too. Could you please let me know where can I find milk powder in the Netherlands? Do they sell it at super markets? Thank you!

Hi Magda, I bought milk powder in a Albert Heijn (it was a XL, so I don't know if all AH's carry it.) You can also substitute the water for milk (or part of it.