Yes it's World Bread Day today.... but also the publishing day of our monthly Bread Baking Babes assignment. So now for the Bread Baking Babe post! This month Elizabeth gave us a free hand in baking, as long as it was a Fougasse. So what's Fougasse all about? CRUST! Cuts in the dough give us more crust and less crumb and as it's almost a flat bread... even more crust.

We could use our favorite dough recipe to make the fougasse, and fill it with the filling of our choice (or leave it plain). Make a ladder or a leaf shape. I like the leaf shape best, but as I made plenty of those already, I decided to make the ladder one this time. It was also easier to get them on the stone side by side this way. I did not fill it, 'cause I just made some hummus that went really well with it.

If you like crusts too, bake along and sent your entry to Elizabeth. (deadline 29 October). Take a peak at the other Fougasse that the Babes baked. (Links in the side bar) 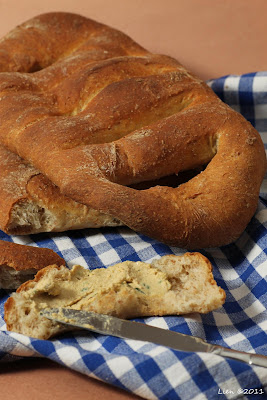 ingredients
preparation
Mix, knead and allow your favourite bread dough to rise to double. If you are adding anything like olives, sun-dried tomatoes, onions, caramelized garlic cloves and/or walnuts, mix them into the dough near the end of kneading it or on the first turn of the dough. If you are wanting herbs/spices on top, please add them just before baking. 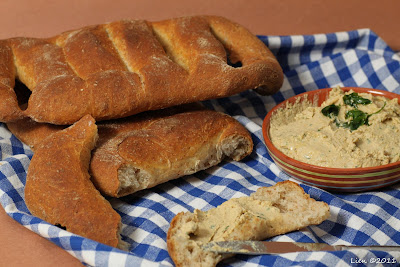 Mix all the ingredients in a spiral mixer until you have a souple dough. Place in a  greased bowl, cover and let rise until it doubles.

(based on the focaccia recipe in "The Italian Baker" by Carol Field)
Geplaatst door Lien at/om 18:59

Hmm Ilike that ladder shape! And hummus.. love hummus! Too bad I'm the only one here. Nice and golden Lien!

We've come up with great new fillings/flavorings I now have to try.
After this I must try the ladder ;-)
Variety is the spice of life.
Gorgeous ladder Lien!

Excellent. I love how dark gold it is. And the ladder shape is easily as beautiful as the leaf shape.

Now THIS is the bread to have with foie gras - why didn't I think of that earlier? Looks wonderful.

That looks delicious with the hummus, and perfectly shaped!

i enjoyed making the ladder, too. And hummus is a great accompaniment!