This month a bread with a story, not mine, but Elizabeth's, who is proudly wearing the apron of the kitchen of the month. She ate it in a restaurant and the chef was kind enough to give her the recipe. I love that, just immagine when she bakes this bread, memories of that wonderful restaurant and the time they spent there will get back to her. Love the fact that the chef was willing to give the recipe too, very generous!

And now for the bread itself. First of all there is fennelseed in it: great! I love that a lot. Then there is blackstrap molasses. There is no blackstrap for sale here in the Netherlands, so I had to improvise. I had some molasses in my cupboard, but that is the real dark and salty one. I have it because there have been some recipes that called for it, but I really dislike it. So I only used 1 large tablespoon of that and added normal brown "cane molasses" or "rietsuiker/keukenstroop" that we use on pancakes and/or bread. That is brown, but sweet. Next were Thompson raisins, and what a coincidense, I really had real US Thompson raisins in the house, bought from the organic store the week before. They are darker then normal raisins and a bit larger. But you can use whatever raisins you have. So far so good.

Whole wheat; check, AP flour: check.... rye flour: o no not rye flour. I don't like rye flour. Not only I'm not a fan of the taste, but also American recipes, that contain (more that a little) rye flour, really tend to ruin the bread. Most of the time I get in trouble with the liquids, the Dutch stuff just doesn't seem to take as much as it should and also rye flour makes it very dense, which I don't like a lot. But as there is only one cup here, I thought it would be OK.

But during kneading I quickly noticed that it was going to be a very very wet dough. I held back 110 ml of water and still had to add over 100 gr of extra bread flour. It all went 'bread dough as usual' from there on, until I forgot to set the timer (ahem....chatting away on the computer) and they turned out pretty dark. Still very usuable and edible though. My man is the rye-eater here, so he ate the bread and like it. I did throw out what was left of that salty molasses this time, I don't think it -even though it was just a TB- was the right thing for this bread and I just decided to never use it again. 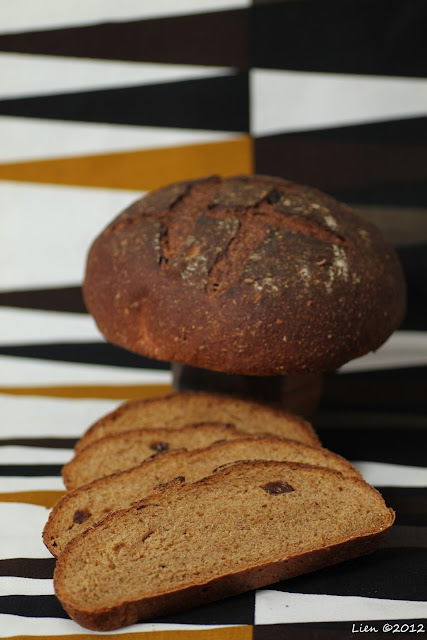 You can check out the recipe on Elizabeth's blog "Blog from our kitchen". And if you like to bake along and become a Bread Baking Buddy this month, you're very welcome too. You know the drill: Bake, taste, blog and tell us about your bread, send your details to Elizabeth, who'll reward you with a Buddy badge to add to your post and add your entry to a round-up later this month. DEADLINE: September 29.
Geplaatst door Lien at/om 13:06

Lien, I didn't even realize that there are so many kinds of molasses before I read what you wrote, I just took the one I have which is one made of sugar cane so now I have to google blackstrap molasses to see what that is. I'm so ignorant...
Your bread is beautiful and I LOVE that background fabric(?) you use, fantastic!

well now I have googled it and it actually looks like the Italian one I have so I will pretend they are the same!

I think your bread looks fantastic, Lien - not too dark at all. I know what you mean about adding rye flour. It does make the dough pretty sloppy, doesn't it? Thank you for making the bread, even though you're not wild about rye bread. (The original recipe called for half the amount of all-purpose flour than I use now and even so the dough is quite slack.)

Before doing the BBB version, I never knew there were so many different kinds of molasses either!

We each seem to learn something different from the same breads!
Your bread looks beautiful. Glad somebody in the house was able to enjoy.
I'm getting better at pitching ingredients that I don't like. It is silly to keep something you really dislike and think about using it again. I say good for you!

Love the color of your bread! Don't change a thing! Oy yes, you are allowed to change the blackstrap! Ugh that's so not nice haha.
Really nice bread Lien, I'll gladly join your husband in eating!

I always just use whatever molasses I have on hand too. They aren't salty over here though.
I love the figgy background on your blog and your bread slices look delicious!

I have never even heard of salty molasses. What would you use it for?? Love the look and color of your bread- fantastic!

@ crumbs of love: Maybe it's a dutch thing I don't know. It's made from cane sugar and it says on the label "salty syrup". It's used as a food supplement, because it's packed with minerals. (available in health stores) I bought it to use as "molasses" for use in some breads. It was the only molasses I could find then. Karen taught me to just use canesyrup/keukenstroop, which is sweet and used on pancakes here.