A real festive edition of the Bread Baking Day, initiated by Zorra five year ago. Yes it's been five year and it's still going strong. I skipped some month this recent year, due to several causes, but certainly not because I don't like the event anymore!! And I had to take part in the festivities for sure this 5th anniversary. Congratulations to you Zorra, for coming up with this ever popular bread baking event.

The theme was "Beer and bread" this month and as the only bottle of beer left in the house was a dark brown (sweet) beer, I searched and found a recipe that was in need of just that. Flavoured a little more with mustard and thyme and you get a perfect sandwich that goes well with cheese or meat on top. And even though the loaf smelled like beer, it didn't really taste like it. But the beer made it soft and moist and for me that's a good thing in bread.

So here is it, my bread with beer.... and here we go with many more Bread Baking Days to come: Cheers!!
Beer and mustard rye bread
(1 round loaf) 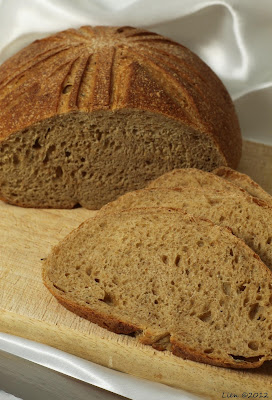 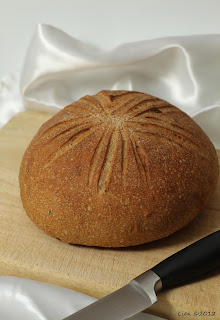 In the meantime preheat your oven to 190ºC, preferably with an ovenstone in it.

Make some slashes in the top of the bread, place it on the stone. Make some steam in the oven by pouring some hot water in a metal container on the bottom of the oven that was preheated too. Bake the loaf for 35-45 minutes until done.

Place all ingredients and just half of the bread flour in a large mixing bowl. Start kneading with the dough hook attached and add more bread flour, little by little, to eventually form a smooth and springy, but still soft to the tough dough. Place in a lightly greased bowl, cover and let rise until you see a little rising going on (this took about 2 hours in my kitchen).

Shape the dough into a ball, cover with greased plastic and let it rise for several hours, until you see an increase in volume. Mind you it won’t rise like a (whole) wheat dough, because of the dark rye flour.

I love your scoring on this one!

(sigh) I am so sorry I missed this one! I really need to do better with Bread Day ...

a sunburst pattern! How cute!
Beer mustard bread.. did you have bratwurst to go with it?

Me too I love the scoring! Thank you for joining the party and your kind words.