And it's high time again for the breads that I baked for the Mellow Bakers this month.
I'll start with the one I baked last: Horst Bandel's black pumpernickel. I posponed baking it and really didn't feel like baking it at all. I'm not a rye lover, nor a sourdough lover and least of all not a pumpernickel lover (though strickly speaking this is not 100% pumpernickel). So I decided to bake half a loaf. Good idea... the only thing is it's easy to get confused and read the wrong notes written next to ingredients (1 or 1/2 loaf). So I used ingredients for 1/2 loaf and added water for 1 loaf. Stupid mistake, result dough soup. So I added more rye chops and bread flour to get to the right consistency, resulting of course in 1 pullman loaf in the end. Because of this is may look different because it misses the right amount of cooked rye kernels. I didn't know how long to bake it, you're supposed to leave it in the oven after you turned the oven off after about 5 hours. According to the recipe you'll know when it's ready when "the arome will fill the entire room". It already smelled like that after 1 hour, so I just took it out after -I don't know how much time- when I remembered it was still in there. It was done, so I was lucky I guess. It's sour, it's dark, it's full of rye... so don't let me judge it on taste, cause it's just not my thing. Even my husband (a pumpernickel lover) -who has to eat his way through this- was not enthousiastic.

Then there was Country Bread. A bread made with a yeasted pre-ferment..Yay! Wonderful uncomplicated, white, fluffy, airy and crusty bread. Totally my kind of bread. 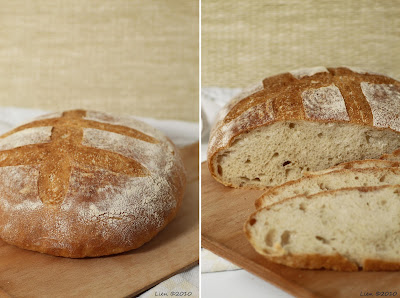 Finally there was Brioche. Rich and good. I made one large brioche. I baked it a bit too short and in the middle it wasn't done, but good otherwise (I cut around it). 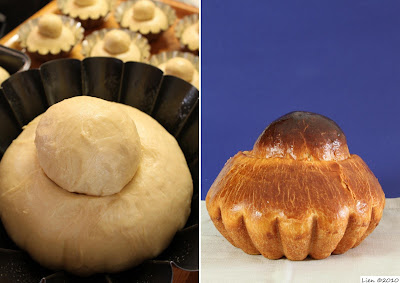 I also made some small brioche-à-tête﻿. Because the little balls on top slided sidewards during baking, the resembled little chicks... so I couldn't resist and added eyes and beaks. Aren't they cute?! 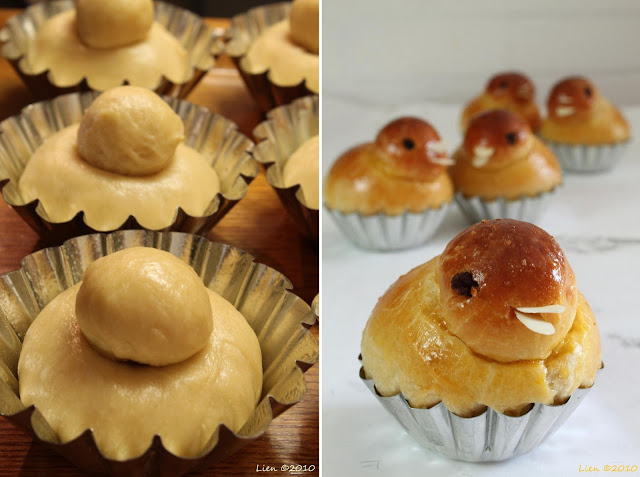 And those were the breads from November... see you next month with more Mellow Baker breads (you remember the group baking through the "Bread"- book by Jeffery Hamelman).
Geplaatst door Lien at/om 12:53

Brioche baby chicks!!!! I want to kiss them!

Great breads, Lien, you are the master! You'll be happy to know that I have ordered some pullman pans - Mary helped me long-distance shop. Babes are awesome that way. ☺

Those baby chicks are soo beautiful! What a clever idea! I love them cheeping away there to each other. Really, really lovely!

Gewoon te leuk!
Cute as chicks, really adorable!
That first loaf must have been a tough one, looks good though, with a slather of butter and aged cheese or ghurkins, horse radish and pate?