Cinnamon rolls without cinnamon? Babes think outside the box

This is the challenge of the Bread Baking Babe Karen ("Bake my day!") for this month, and it's just like her to let us bake cinnamon rolls without cinnamon! And yes I'm a day late. But I think I'm a good girl for getting it baked and posted at all. It's been a crazy week without much sleep (and I don't do well when sleep deprivated). We had a Spanish exchange student over for the week and two boys take even longer in the bathroom in the morning than one, so I had to get up very early to be ready before them. Although in all honesty I must say our own boy takes definitely 4 times longer than our guest. Very late in bed because as I was the designated taxi driver, I had to pick them up at night, when they had their get togethers. This after the flue, of which my body is still recovering, can't remember being so tired for so long just from the flue. But anyway, I was a zombie during most of the day. Our Babe Karen Kerr said I could make the dough in advance (in de the fridge), so I could divide the tasks in two. That was good advice, but I totally forgot that my Kenwood is out of order, and I still haven't taken any action to get it fixed. So very annoying, so I had to buy bread, never bought so much bread for... well for over a decade. I didn't like it at all, but I had to feed them something right. I can't knead it by hand because of the arthrosis in my thumbs.

So after we had dropped our guest off  and waved goodbye at  school to drive to the airport with the rest of the Spanish students, I got my tiny old Kenwood chef out of the bag...I forgot how small it is and how awful this dough hook is. But there I went and kneaded the dough... then I read in the recipe that it just had to be 'combined'.... that can't be good, so I kneaded anyway, just didn't feel right to do a no-knead here.
Then I read in the recipe that baking soda and baking powder had to be added after an hour. (did I mention that I was tired?), well I tossed everything in from the start. Except for the milk that I reduced down by 130 ml... and it still was too wet. So I must have read the recipe at some point to be aware of that. I choose a pastry cream filling with tropical flavours. I made the pastry cream in advance..... I had to bin it as it had been in the fridge too long and had a funny smell, so had to do that again. In the end the rolls did turn out alright, even though I shouldn't have baked them in a glass dish, the bottom in the middle was barely cooked. Then I had to rewrite the recipe to how I did it, I just hope I added all the changes, because I couldn't remember it all I think. The taste is quite sweet, i would omit the coconut blossom sugar next time I think, but very delicious with that coconut pastry cream, I love that.

O yes I almost forgot: I did use all three rising agents. I wouldn't use them all again to be honest, I didn't find much difference with the dough part compared to the normal "just instant yeast" dough. I didn't research anything about it (obviously!) so read the other Babes' posts what they discovered.

Would you like to bake along with us and make cinnamon rolls without cinnamon? Get creative, bake and become out Bread Baking Buddy. Send your findings in baking these rolls, picture ecc and send this to  "bakemyday at gmail dot com" , that is the kitchen of the April.  Have a look at Karen's blog for more info and the original recipe.

Don't forget to take a look at what the other Babes baked, so many combinations of flavours and all mouth-watering delicious! Links in the left side bar.


"This is not a cinnamon roll"- rolls…. because they are my
Sweet Tropical Rolls
(Makes 12 rolls) 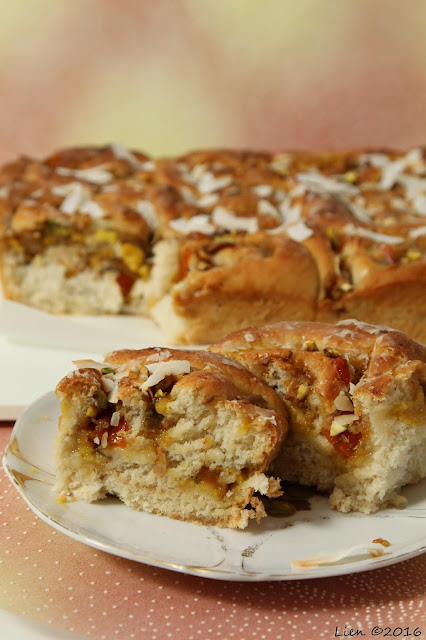 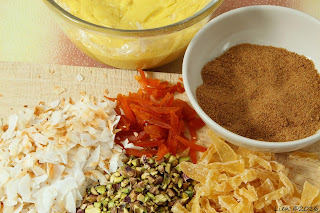 sugar glaze (optional)
some pineapple juice
icing sugar
Dough
Place room temperature milk, vegetable oil, sugar and yeast in a bowl. Add 520 g flour. Knead the dough, cover and let rise for 1 hour.
You may now proceed to roll out the dough in a rectangle or refrigerate for at least an hour or up to 3 days. (Probably need to keep an eye out for overflowing dough, so punch down if it rises to the top). Relatively slack dough so it probably is easier to work with when chilled! 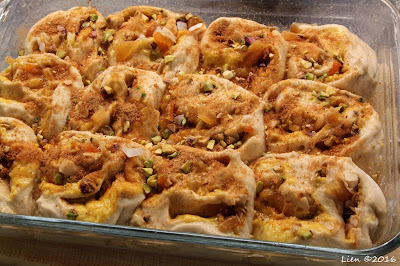 Coconut pastry cream
Mix in a bowl: sugar, cornstarch, egg yolks and a little coconut milk. Slowly heat the rest of the coconut milk in a pan, scrape the seeds out of a vanillabean (or a ½ bean) and add that to the milk, also add the bean. When the milk has come to a boil, take the bean out and pour the hot milk into the egg mixture while whisking well. Then return the whole mixture back into the pan and bring to a boil on medium heat. Continue to stir or it will burn on the bottom of the pan. Let it boil for 2 minutes. Take it off the heat and pour it into a heat proof bowl. Cover the surface with clingfilm to prevent the forming of a skin and let it cool, then put in the fridge until use.
Continue with the dough
Next, remove the cover and add baking powder, baking soda, salt and more of flour if needed, Knead it well, but the dough will be slack. Put the dough in the fridge for 1 hour.
Proceed as you will with any other rolls you make; roll dough into a large rectangle on a floured surface. Original states to roll thin. Use whatever you feel comfortable with. Although I can imagine that a slacker dough might need to be rolled thinner?
Filling: use your imagination... go sweet, go savoury, go wacky. Make it yours and make it good! 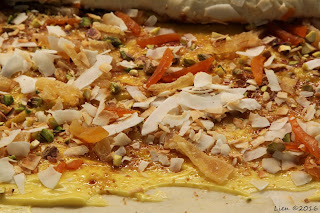 I used a tropical filling like this:
Roll out the dough into a large rectangle. Spread about half of the pastry cream evenly on the dough surface, sprinkle 40 g of coconut blossom sugar over the pastry cream. Followed by the pineapple and mango pieces, chopped pistachios and the slithers of toasted coconut.
Roll up the dough from the long side, don’t push too hard or you will press out the pastry cream. Cut 12 slices (about 4 cm thick) and place them in a large rectangle baking tin or oven dish, cut side down. Cover and set aside to rise for at least 45-60 minutes before baking.
Before placing the buns in the oven, sprinkle the remaining 10 g of coconut blossom sugar and chopped pistachios over the top. Bake for 20-25 minutes in a preheated oven (190ºC) until golden brown. Place on a wire rack to cool before icing the buns.
Glaze:
You can make a little glaze with icing sugar and pineapple juice(or lemon juice). If you just want a shine make a thin glaze and brush it over. If you like your glaze thick, add more icing sugar and let it drizzle over the top. 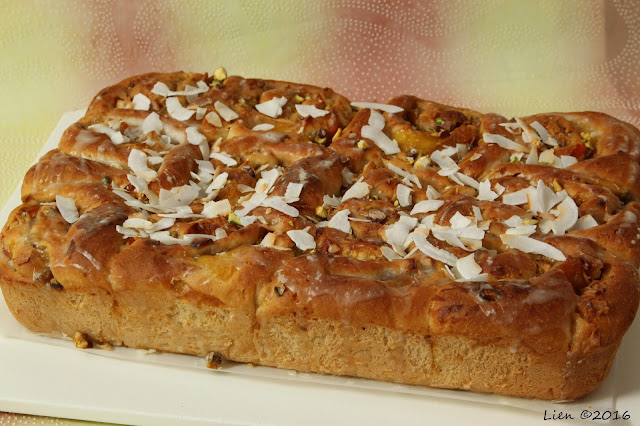 I love your tropical take on these rolls! They are quite beautiful! Hope you have a chance to decompress and rest now. :)

Wow, the coconut cream with the tropical fruit and pistachios are so creative and sound delicious!!

Your Kenwood is out of order again?! What a drag!

Isn't it great that even when things are put in out of order, the bread still turns out. Or at least it looks like it turned out. Your rolls are beautiful! And coconut cream with pistachios and tropical fruits sounds like fun.

(What?! We weren't supposed to knead at the beginning? We were just supposed to combine the ingredients? Oops. I didn't notice that!)

I hope your spring starts improving! Your rolls would surely improve my moods - such a wonderful combination of flavors.
As to boys in the bathroom..... Been there. 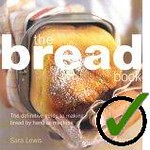